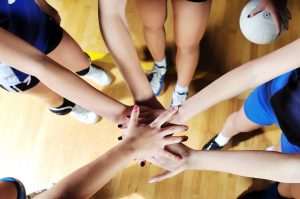 There is an old saying that goes, “You never have a second chance to make a first impression.” Nowhere is this truer than at a volleyball tryout. Volleyball is an extremely competitive sport. Numerous athletes compete for limited numbers of positions on the best club teams everywhere. Doing your best at the tryout can be the difference between being on the team or being on your way home. Proper preparation before a tryout can make the difference between making the team and going home disappointed. By following the below suggestions, you can maximize your chances of making a club team.

Don’t get stuck in the registration line. Showing up late for a tryout is a sure-fire way to get noticed, but it’s not the kind of attention you should be looking for. Plan to arrive at least 15 minutes before registration starts. Besides revealing your maturity level and character, arriving early allows you to relax and begin focusing on doing your best. Rushing in at the last minute will leave you tense and flustered. Plan to warm up after you arrive early. There are several reasons for warming up before a tryout. The most important reason is that by warming up, you’re more likely to perform at your peak. Getting your blood flowing and your muscles ready also reduces the chances of an injury during the tryout. Finally, it shows the coaches that you’re mature enough to understand the correct way to prepare physically for an athletic event.

2. Don’t bring your cell phone into the gym

Coaches don’t want to see you texting when you should be concentrating on volleyball. If you do have your cell phone in your bag then make sure it is on silent. Coaches aren’t babysitters and don’t want to spend their time and energy looking after their players. They expect their players to be mature enough to be prepared when it’s time for tryouts, a practice, a game or a tournament.

3. Hustle and go for every ball

Even if you know it’s unlikely that you’ll get to it, don’t stop pursing the ball until it hits the floor. Even in warm-ups! Coaches love aggressive players that will not let a ball drop. If you’re shagging balls, run to get them. After taking your turn at a drill, run back to the line for your next turn. When you take a water break, run to the drinking fountain or to your water bottle. If a coach is looking for a volunteer to shag balls or feed balls, be the first to volunteer. Be willing to help out in any way you can during the tryout. Show that you’re ready to lend a hand and willing to go that extra little step for the team.

4. Show that you are coachable

No matter how good a player you are, every coach you ever play for wants to know that you’ll improve under his or her tutelage. For this to happen, the coach has to believe that you’re capable of being coached. Behaviors you display during a tryout can convince him or her that you’re open to guidance. If a coach tells you how to improve some facet of your game, take the suggestion positively. Don’t tell him or her this is the way your old coach taught you to do it. Verbally acknowledge the suggestion and then immediately start performing the action the way he or she has suggested.

5. Don’t talk when the coach is talking

It’s disrespectful to talk when the coach is talking and sends a bad message to the coach. Each time someone on the staff addresses you, you need to give him or her 100 percent of your attention. Make eye contact with the coaches as they are talking. Nod your head when they ask if you understand what they’ve told you. If you don’t understand their directions, raise your hand and ask for clarification. It’s better to ask a question than to look like you weren’t paying attention.

6. Communicate and always call the ball

This is one of the few things you can control and it is an underrated skill that coaches will notice. Almost every coach who ever laced up a pair of shoes and hung a whistle around his or her neck tells players the same thing: “Call the ball!” Have you ever had a coach who didn’t tell you to do this? By calling the ball during tryouts, you’re demonstrating that you’ve learned something from past coaches and you’re likely to learn things from your next coach, as well. Be a vocal leader by encouraging other players to do their best. Cheer them when they make a great play. Help teammates by telling them whether a ball is in or out during scrimmage play.

Playing volleyball at its highest levels takes a tremendous amount of work. Coaches are drawn to players who are willing to work hard enough to play at that level. Never assume you’ll get selected if you’re giving anything less than 100 percent of your abilities. Most coaches will select a player who is hard working over a more talented athlete who is hardly working at all. Another way to demonstrate your willingness to work hard is by hustling every- where. If you’re shagging balls, run to get them. After taking your turn at a drill, run back to the line for your next turn. When You take a water break, run to the drinking fountain or to your water bottle.

Don’t carry a mistake with you into the next play. A coach can tell by your body language if you’re not over being messing up on the previous point. Avoid negative talk about yourself, the tryout and former teammates. If you start getting down on yourself for making a mistake, you’re likely to make even more. No one wants to hear negative talk about the team you were on last year. Coaches know if you speak badly about previous seasons, next year you’re likely to speak badly about this particular team, too. Show your enthusiasm during the tryout by keeping a smile on your face. Be friendly to everyone you interact with. Have fun and make sure people who are watching can tell you love playing volleyball.

9. Be open to stepping into another position

Coaches want players who can adjust and are willing to be versatile if that’s what’s needed to make a drill work or help the team. Have confidence in yourself. You need to believe in yourself and your abilities. A player with a great deal of confidence isn’t as likely to crack under pressure during a match. After all, if you don’t believe that you can make the team, why should the evaluators believe it?

The rules require that six players be on the court during a volleyball game, so it’s impossible for even the best player in the world to win a match by him/herself. In addition to athleticism and skill, coaches are looking for players who work well with others to build a team. It will be a miserable season for coaches and players alike if the players lack the chemistry that allows them to work together well. You can help other players do their best by giving them the best pass or the best set possible. Taking that extra step to make them look good makes you look good, too. During tryouts, you can demonstrate that you’re a team player by doing your best to get along with other players. Cheer for others when they make a good pass. High five someone who just had a monster block. Get excited when a teammate serves an ace during a scrimmage. Players who exhibit a positive attitude toward tryout competitors are likely to make good team players during the season.

Bonus: Don’t show up for a tryout wearing a T-shirt from a rival club.