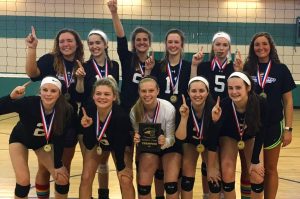 Does Changing Clubs for a 1’s Team Affect Your Recruiting Process?

As High School seasons start to wind down across the country, the excitement and buzz of the club season is all around us. In turn, the age old question from athletes (at least those competing in club volleyball) returns. Does changing clubs in order to play for a 1’s team have an affect on a player’s recruiting process?

As the Recruiting Coordinator at one of the top clubs in the country, where high-level training and preparation to compete at the next level is the priority regardless of the player’s team, I am bombarded with recruiting questions daily.

Here are a few that I have been asked recently by both athletes and their parents alike:

As always, my goal is to put the student-athletes’ best interest first and objectively answer these questions to the best of my ability and experience. I am of the opinion that an athlete should be most concerned about the level of training and competitiveness that is historical to that club. I would counsel the family to take the time to find out more about the depth of training and college preparedness that the club offers. A prospective student-athlete can be best prepared to play at the collegiate level regardless of the whether she is playing on a 1’s, 2’s or 3’s team if the club is focused on high-level training and maintains high level coaching at all levels.

In my daily conversations with college coaches they look for factors that have nothing to do with whether the athlete is on the 1’s team or 2’s team.

For instance, the priority of college coaches is to recruit athletes that are trained at clubs with:

This discussion begged for me to head to college coaches and ask them for feedback. The following question was posed to coaches representing High-Major DI’s through NAIA schools.

“When you are recruiting a student-athlete, what are your thoughts when they switch clubs to ‘make a higher number team’, in turn does this negatively affect your position in their recruitment?”

Of the 75 coaches I surveyed, 55 (73%) responded that it would negatively affect their view of the athlete if she switched clubs just to make a higher number team. They would believe the athlete to be more concerned with recognition over key factors such as training, competitiveness and being prepared to play at the next level. Ironically, almost all of the 55 coaches shared that if the athlete was making the switch based upon higher level training or the opportunity to play another position that would enhance her potential to be recruited, then it would not be considered a detriment to her recruitment.

Last November the JVA addressed whether playing on a 2’s team could be a better fit. The following is an excerpt from that article with some ‘spot on’ feedback from college coaches.

Before making your decision, find out exactly what your role will be for your team. Too often players choose the 1’s team and end up playing only a fraction of each match or barely see playing time at all. This makes it difficult for a college coach to evaluate a player at a tournament. Coach Jenny McDowell, Head Women’s Volleyball Coach at Emory University believes it is valuable to gain playing time. “For me, it does not matter if a player plays on the 1’s or 2’s team… it just depends on the level of the player. I would much rather have a player play for the 2’s team than sit on the bench for the 1’s team.”

Greg Reitz, Head Women’s and Men’s Volleyball Coach at Lourdes University states “many times the kids on the 2’s team get to play more consistently, for example a 6 rotation right side or outside hitter. That usually doesn’t happen on a 1’s team because you are chosen to play a position, in addition to your teammates the Defensive Specialists that fill the roster.”

In closing, as with any decision making process that you enter into in life, the intent and outcome should always be weighted with what is best for your long-term goals and what will have the most positive impact on your life. So, young athlete, be wise, take the time to consider all the factors, ask questions, stay focused and don’t get caught up by numbers…because in the end if you make the right choice based upon the right factors, a number will never define who you are and where you play collegiately.