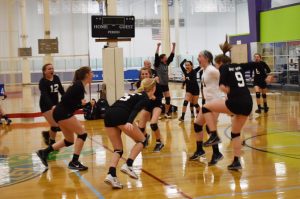 Making the Transition from High School to Club Volleyball.

There are nearly 900 Junior Volleyball Association clubs across the country working each year to help players achieve their goals – whether that is to improve their skill level, make a high school varsity team or get recruited by a college program.

With club volleyball continuing to grow as a popular complement to the high school sport, players and their families often have questions about the differences between the two and what are the benefits of playing both.

The short answer is plenty, but it’s not as overwhelming as it may seem.

A key difference is the cost, as travel and training at the club level tend to be more expensive. According to the JVA online blog, players on a Regional Team playing eight tournaments a season could pay approximately $2,600.

Maybe the most noticeable distinction is the time commitment.

Although it differs from program to program, girls club volleyball usually straddles the high school season, which typically runs from August to November. The club season picks up afterward and can carry a player into June.

The thought of a lengthy commitment to one team shouldn’t scare off prospective players or their families as there are multiple teams within each club that require varying levels of participation, said Briana Schunzel, the director of marketing for the JVA.

“One shouldn’t just assume by playing club volleyball that you’re gonna be committing to a seven-month season, playing tournaments every other weekend,” she added.

“We tell people to seriously consider both money and commitment levels [when choosing a club team].

Those players who want to be college athletes consider the club season as an opportunity to improve their skills because they are facing the highest level of competition.

Even the most driven club players, however, are encouraged to avoid overdoing their training.

While club teams play nearly the same amount of matches as prep programs, which can near 80 per year when factoring in the offseason training, the risk for overuse injuries is lower thanks to a club season that is nearly twice as long and a coaching directive that stresses injury prevention.

Coaching also separates the two levels with club participants often receiving instruction from more experienced coaches who have played and instructed at high levels for years.

Another significant difference is the setting in which matches are played and who attends them.

Club teams play in local, regional or national tournaments – depending on the team’s skill level – in the winter and spring months. This allows college coaches to easily see a number of players in one weekend instead of visiting multiple high schools only during the fall prep season – when they are also coaching their own teams.

“It’s hard for college coaches to go to high school practices and matches,” Jablonski said. “They can go to a convention center and there could be 100 courts, so the exposure is a lot higher [at the club level].”

Participating in club volleyball, however, doesn’t automatically lead to college scholarships. Just as high school athletes must earn playing time, they must also prove they deserve the opportunity to compete at the next level.

Schunzel said club players are surrounded by others who have similar skill levels, making it harder to stand out.

“On club teams, you may find yourself having to work more for a starting position,” she said.

Even so, club volleyball remains a positive experience for many participants, and communication between players and parents is critical when discussing joining a club. It’s important for both to talk about what each wants out of playing volleyball, especially since year-round volleyball can sometimes feel like a full-time job.

“For a lot of families, it’s understanding the cost of club volleyball, and the ability of their child,” Schunzel said. “It’s important that parents understand what their kids’ priorities are.”